Transport Auckland finally bowed to pressure and has approved a Ferry Terminal installation to cope with the gridlock after heated protests from residents of the new Long Bay development. 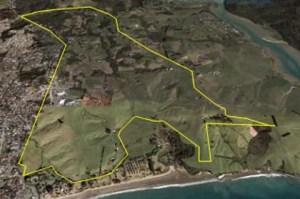 Long Bay was highlighted by former Prime Minister John Key as a sign of growth and opportunities for the construction industry back in 2013. It started with 2,500 houses housing an average of 3 people. Then they opened up 3 more subdivisions and another 23,000 people moved into the area.

With 30,000 more people trying to make the trip to school and work, combined with people from all over Auckland heading to and from one of the most popular beaches in Auckland, the roads have been gridlocked. Minor widening of the local roads hasn’t appeared to make any difference.

Jaap Botha one of the early buyers said “This was our dream purchase. A beautiful new home with views of Auckland Harbour. The problem with it is that I hardly get to enjoy it. In order to get to work in the city I now have to leave home at 6 AM to get to the office by 8 and more than half of that time is spent getting from home onto the motorway on-ramp  The total distance is only 21 km!

“By the time I get home its nearly dark. Four hours of commuting at an average speed of just over 10 km per hour is enough to raise the stress levels far higher than the benefit of living in a nice area like this. Property values are going down because buyers don’t want to spend 4 hours in their cars every day either.”

Auckland Transport advised that ferries should be operational from the new Long Bay ferry terminal within 18 months. Locals say this is something they will look forward to, but many will have left the area by then.